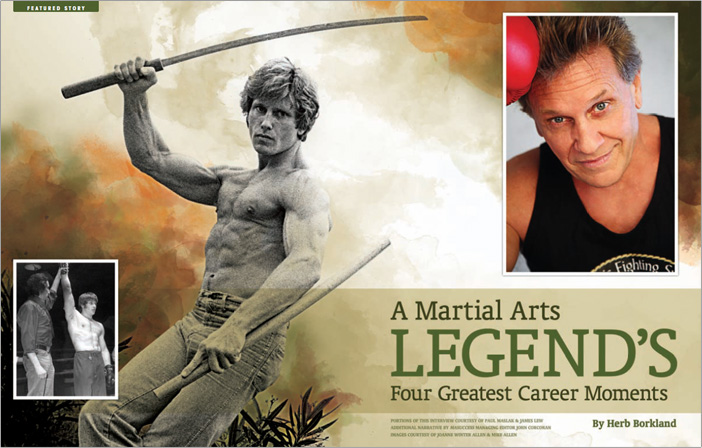 From earning his black belt in traditional shorin-ryu karate in Okinawa in just seven months, to fathering kick boxing, to teaching unique advanced combat principles to legions of martial artists across the world, icon Joe Lewis has profoundly impacted modern martial arts and the way we practice them. What he’s pioneered and achieved in his nearly 50-year career made Lewis an obvious choice as the recipient of this year’s MAIA Lifetime Achievement Award at the 2012 MASuperShow in Las Vegas.

The year was 1966 — a time for legends. James Bond and black belts were so hip even Bond had a black belt in judo. The Beatles played from every speaker and the Vietnam War was in full force.

That May, in Washington, D.C., Jhoon Rhee, the Father of American Taekwondo, held his prestigious U.S. Nationals karate tournament. Here occurred the most impressive debut since Bruce Lee, two years earlier, whose  sensational demonstration at Ed Parker’s Internationals in
Long Beach, CA, became a memorable landmark for everyone in attendance. In both of these tournament settings, startled spectators
saw a full-blown international star materialize out of thin air.

At Master Rhee’s high-powered tough guy festival, right smack in the aptly-named “blood-and-guts” era of tournament karate competition, there appeared a U.S. Marine corporal, a 22-year-old North Carolina farm boy who had earned his Okinawan shorinryu black belt in an unprecedented seven months. The 5’ 11” lion named Joe Lewis came roaring out of nowhere — unheralded and overpowering — to dominate both fighting and forms as Grand Champion at this, his first tournament.

Lewis’ fighting debut was phenomenal for three reasons: 1) He had never even seen a tournament before and was totally unfamiliar with competition rules. 2) Only one single point was scored on Lewis that day, even though some of his opponents were national champions. 3) He beat every opponent using just one technique — an unstoppable side kick that was both lightning-fast and battering-ram brutal.

That was just the beginning of an extraordinary martial arts career that now spans almost 50 years. During those decades, Lewis achieved so much, set so many records and pioneered so many concepts — in and out of the fighting ring — that it would take a book to cover them all.

He’s such an icon in our field that, for just one example, his Facebook account was maxed out with 5,000 names shortly after it went active. His achievements inside the martial arts often got recognized by important people outside of our field. The artistic rendition of Lewis’ well-known fighting pose gracing our cover this month was painted by noted sports artist Bob Mueller, recognized for his portraits of football and hockey sports legends, and commissioned by Lewis’ veteran black belt student, John Graden.

Lewis’ massive contributions to our profession made him a clear choice to receive the Martial Arts Industry Association’s 2012 Lifetime Achievement Award. It will be presented to Lewis at this year’s Martial Arts SuperShow on July 1-3 at The Venetian® Resort Hotel and Casino in Las Vegas.

Like any other prominent sports celebrity with decades of media exposure, Lewis always gets asked the same questions in interviews by most magazine reporters. So, we took a different approach for this article. We asked him to define his greatest moments in four different categories of his martial arts career and what those magic moments meant to him personally. Those categories are: his early karate training in Okinawa; point-fighting; kickboxing; and his relationship with the late, great Bruce Lee.

Considering that Joe Lewis, 67, is currently fighting, and winning, the biggest battle of his life — against cancer — it’s presumably a fitting time to pose these personal questions. His situation has placed the martial arts superstar in a very reflective state of mind about his life in general and his martial arts legacy in particular these days.